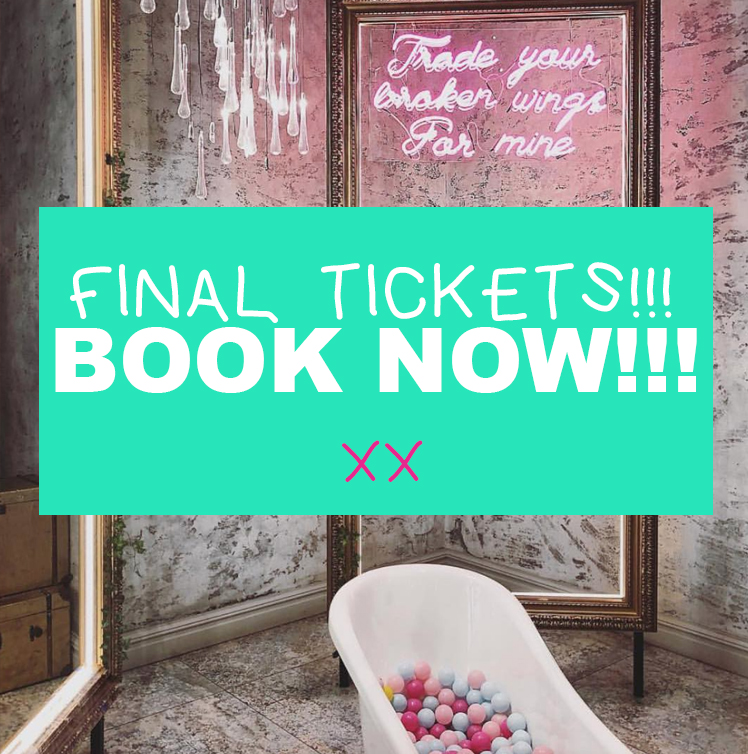 At the stunningly decadent venue, Menagerie Manchester; Visitors will hear and learn some incredible motivational stories and techniques from our panel of MINDSET ambassadors, LIVE on stage, featuring;

In addition to the talks, during the three-hour event; visitors can mingle with a host of successful parents/bloggers and celebrities who will be sharing their pearls of wisdom, offering advice on how they juggle parenthood with a successful career.

Whether you want to learn how to turn your social media into a money-making-machine or simply uncover the self-belief it takes to start your own business or create that product you have been dreaming of, this is the event for you!

If you genuinely want to get out of your current situation, want a better life but feel un-motivated and don’t know where the heck to start, or just want to be within dancing distance of the stars or meet some of the UK’s hottest business talent, then join us at:

Those looking to continue the party and dine at Menagerie and enjoy a 25% discount off food. 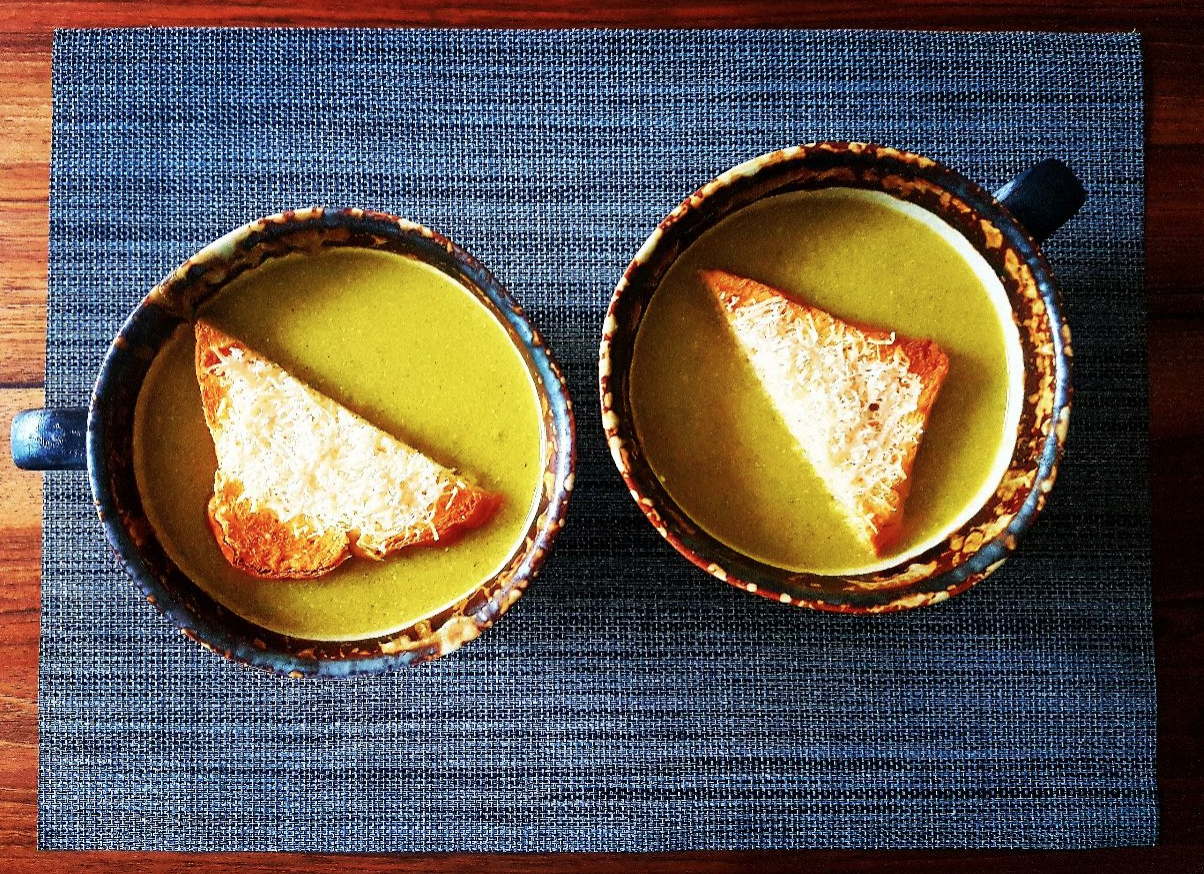 by Olipophatbaby | Mar 9, 2018 | Motherhood, Recipes for the chaotic, Winging healthy food like..

Chicken, broccoli and carrot soup with a parmesan toast

For a few weeks after we found out that Anni was pregnant, nothing changed. I mean, of course, everything was different, but everything was also the same. And because life just went on I couldn’t get my head round the fact that by autumn I’d become a father.
I kept looking up how big the life growing inside her was, continually surprised at how this microscopic collection of cells was set to take charge and change everything.
In terms of food nothing also changed for a few weeks. Anni carried on in her usual calm way whilst I began to freak out and inspect the sell-by dates of every bit of food we had, turn our steaks into pieces of rubber and boil our eggs for 7 hours minimum.
After doing a bit of research into what women can and can’t eat during pregnancy we both discovered that pretty much all advice was contradictory, and the vast majority of foods recommended to avoid were based on guesswork, not fact. Just don’t eat raw food, don’t have too much mercury-rich fish and don’t give yourself salmonella.
Anni and I had a combined age of 68 and a combined salmonella contraction rate of zero, so I thought that we were going to be ok.
Instead, I chose to focus on all of the great food she could eat, and how each ingredient can be of benefit not only to her but to our unborn child. I’ll admit, now that my principal role in child creation was sadly over (and boy was it over) I was feeling pretty redundant. At least by taking charge of what we would eat over the coming year, I could feel like I was involved, and it was one less thing for Anni to worry about.
However, a few weeks into pregnancy, everything changed.
Anni began to find the thought of vegetables pretty unappealing and if I didn’t make food for her that was
basically beige in appearance, she would have none of it. She also began to crave salt so I had to act fast before she started eying up the salt pot at 11am each day.
My challenge, therefore, was to make appetizing dishes that I knew she would eat in those first few weeks, but also provide enough of the good stuff for our growing baby.
So I started to hide vegetables in food. I started to do this a lot. Soup was my number one way of hiding vegetables for Anni in her first trimester. It was the middle of winter, nights were cold and dark and so a warming bowl of goodness and some cheese on toast went down really well.
I made a lot of soup in those first few weeks, they are so easy to make, require minimal preparation, are a great way of using up lots of vegetables and also freeze really well. This particular dish is packed with broccoli which due to its high folate, fibre and vitamin content, is a fantastic pregnancy superfood. The parmesan toast also satisfied her salt cravings.
Ingredients
Method
Why is this good for mum and baby?
Chicken – Protein, vitamin B, zinc
Brioche – Fibre, protein
Parmesan – Protein, calcium, vitamin A
Carrots – Vitamin A, C, potassium, fibre, calcium
Broccoli – Vitamins A, B, C, E, K, folate, potassium, fibre
Rosemary – Vitamin A, B, C, folate
Thyme – Fibre, Vitamin B, C, calcium
Onion/shallots – Fibre, Vitamin B, C, D, K, Zinc, Iron, Folate,
Magnesium, potassium

Make sure you follow me on Instagram @at_dads_table for food that is, well , delicious and also cheack out my blog www.thefmlyman.com
See you soon
Adam 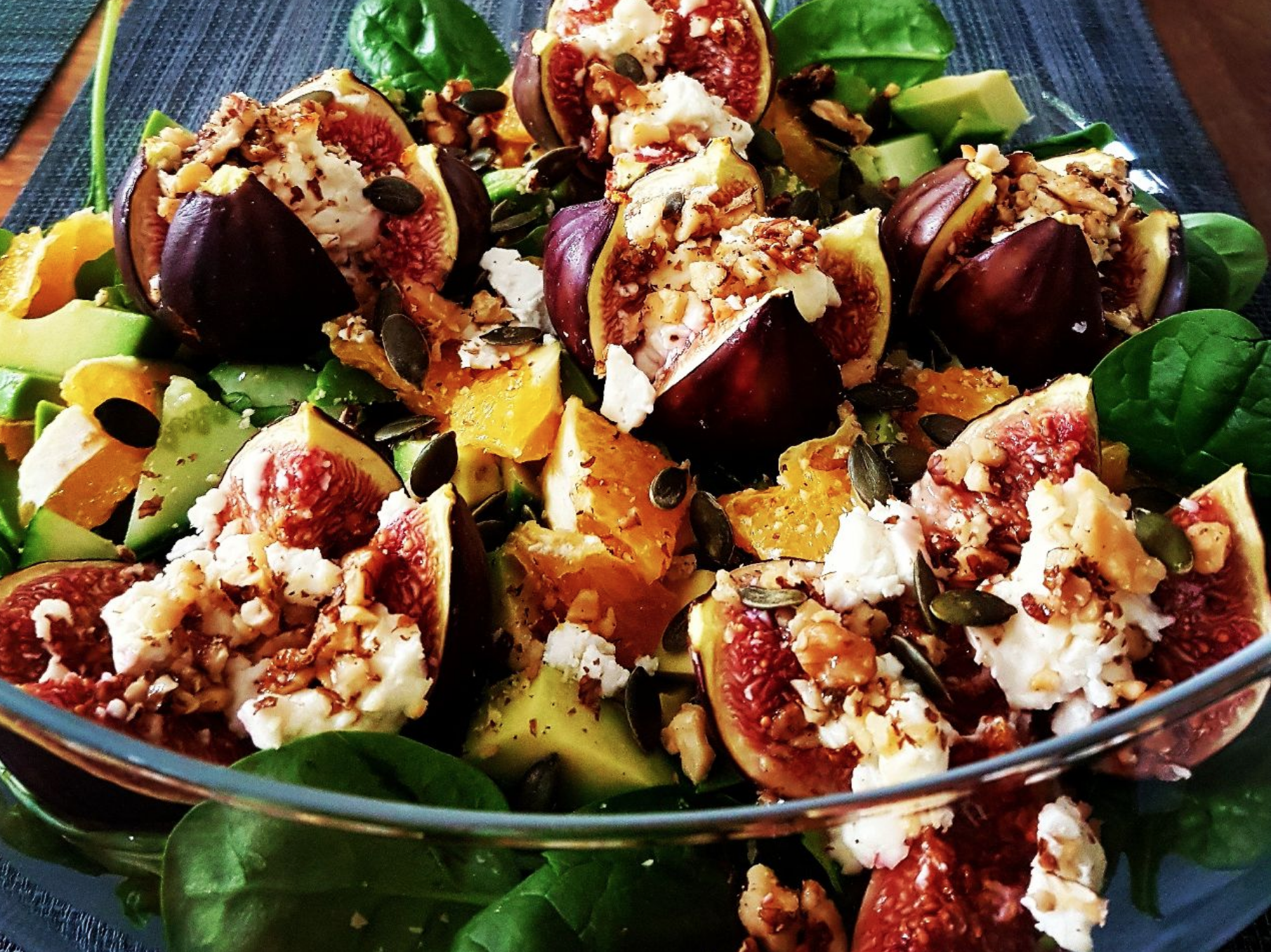 by Olipophatbaby | Mar 2, 2018 | Motherhood, Recipes for the chaotic, Winging healthy food like..

This dish is just absolute goodness on a plate. Every single ingredient used here is healthy
and full of the good stuff mum needs to nourish her baby.
There’s a lot of pregnancy superfoods in this dish. Feta is a great pregnancy cheese as its full
of calcium but contains a far smaller amount of calories than other cheeses. Figs are full of
fibre, magnesium and vitamins and the more pumpkin seeds and walnuts you can eat, the
better as they contain lots calcium, iron, zinc and omega-3.
Add to that all the healthy benefits of the cucumber, avocado and spinach and you have a
delicious and nourishing dish. Visually this is also one of my favourite salads as the roasted
figs open up like flowers when cooked
Ingredients
-6 figs
-200grams of feta
-two oranges
-two teaspoons of honey
-one handful of walnuts
-one avocado
-two teaspoons of pumpkin seeds
-half a cucumber
-two handfuls of rocket leaves
-two handfuls of spinach leaves
Method
-Cut up the avocado, orange and cucumber into bite sized pieces, add the rocket and spinach
leaves and mix together in a bowl, adding a little seasoning and olive oil.
-Turn the grill on and slice criss-crossed into the figs about two-thirds of the way down. Fill
the figs with some of the feta and roast under the grill for a few minutes until the cheese has
melted.
-Remove from the grill, drizzle a little honey over the figs and top with crushed walnuts.
– Place in the salad, sprinkle pumpkin seeds over and serve whilst still warm. 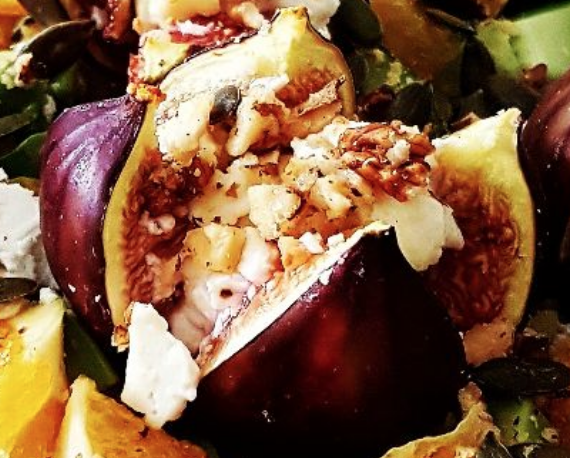 Why is this good for mum and baby?
Figs = Fibre, magnesium, iron, vitamin B, D, K
Oranges = Calcium, Folate, Vitamins A, B, C, potassium
Cucumber = Vitamin A, B, C, K, folate, magnesium,
potassium, fibre, iron
Avocado = Vitamin A, B, C, D, E, K, folate, potassium,
omega-3 fatty acids, fibre, magnesium, calcium, iron
Pumpkin seeds = Calcium, protein, iron, vitamin B, zinc, omega-3
fatty acids
Rocket = Vitamins A, C, K, folate, calcium, fibre, protein
Walnuts = Omega-3 fats, vitamin B, E fibre, protein
Spinach = Calcium, Iron, Vitamin A, B, C, K, folate,
magnesium
About At Dad’s Table:       Instagram @at_dads_table
I’m a Leiths trained chef on a mission to overhaul the way we see and enjoy
food during pregnancy. Current healthy-eating advice when you’re pregnant focusses on what you
can’t eat whereas I want to focus on all of the amazing food that you can eat over the nine months
and beyond.
When my wife became pregnant with our first son last year as a guy I felt pretty redundant. So I
decided to make sure that whatever we ate over those nine months not only tasted delicious and
made her feel good, but was also full of vitamins, nutrients and other good stuff for our unborn child.
Make sure you follow me on Instagram @at_dads_table for food that is, well , delicious and also cheack out my blog www.thefmlyman.com
See you soon
Adam 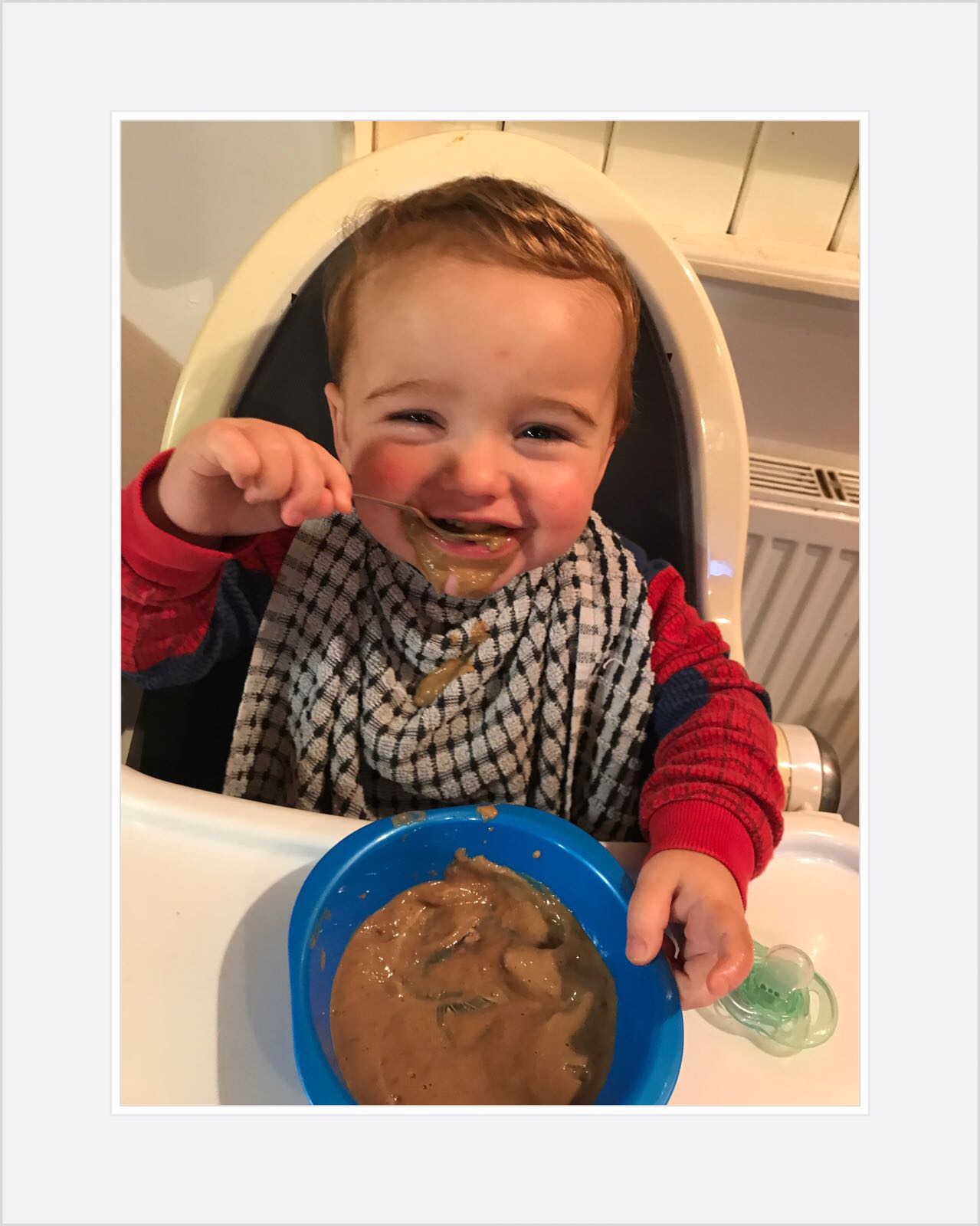 Chocolate for breakfast? Why the hell not!

Hello everyone, Sam the foody blogger here. I hope you’re having a fabulous week?

So this week I’ve had a serious lack of food, lack of car, lack of hubby and a lack of supermarkets who lack the ability to drive down the bumpy track to my home.

So awaiting my mum and sister to come to the rescue, I was questioning “what the hell am I going to feed my children for breakfast?”

This recipe I call all the 2’s

Because, it’s a simple, quick, and delicious breakfast which only takes 2 minutes!

Almond milk (as much or as little as you prefer, we prefer a thick smoothie to eat out of a bowl – so use less for this)
2 x tablespoons of chia seeds
2 x tablespoons of Cacao powder
2 x dates (you can add more if you like it sweeter)
2 x small bananas
2 x halves of avocado (so basically 1 avocado, but that doesn’t fit in with all my ‘twos’)
2 x teaspoons of protein powder, any will do. We use an organic hemp version

Chuck it all into the blender!

TOP TIP *put the Almond Milk in first, so the powder doesn’t stick to the sides! 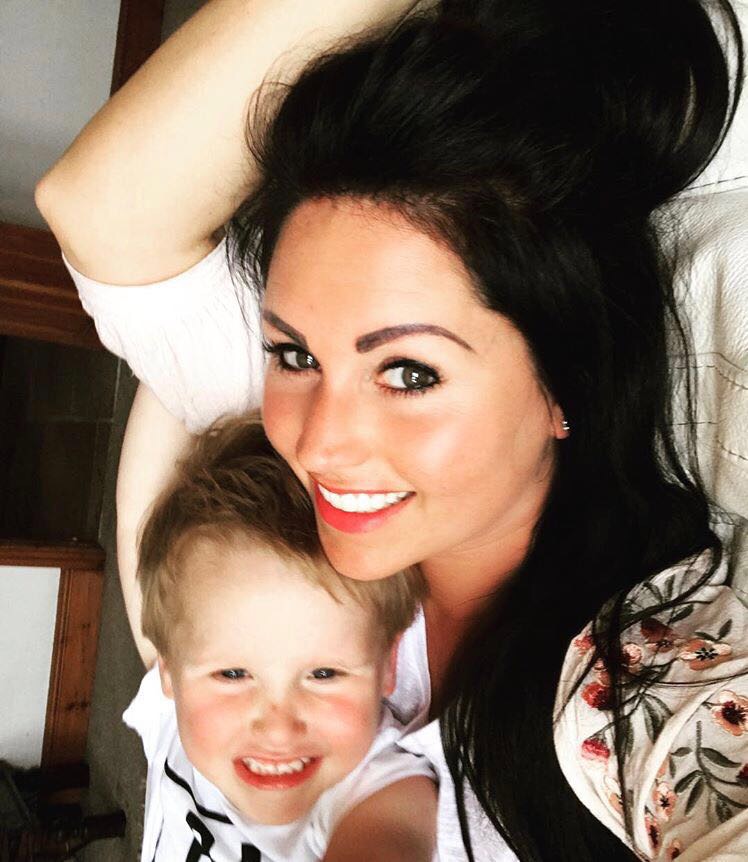