I haven’t written a blog for a while, and the last couple of blog posts I have written have been promoting some other fabulous mummies and some family-friendly business. I feel however, I need to get back into the swing of things and let go, that and we had a minor scare the other day!!!

I am going to talk about health anxiety. WHAT THE EFF. Now, I know that a few of you will have experienced this and not actually realized that it is a thing… but, trust me…it is a bloody awful thing.

From being young, I had a mild form of health anxiety – although it is only in the last 8 months that I have realized that is what it was and is an actual type of anxiety.

I remember when I was around 18 years old, just after my grandmother died, I used to get headaches all the bloody time. My head would throb and I convinced myself that I had a tumor and that I was going to die. I understand that even writing that may seem a bit OTT, but at that time it was very real. Id tells my friends that I was dying of a tumor and they would look at me at me sopping into my wine, drunk, and smoking (yes I am an ex-smoker), days, weeks, months went passed where all i could think about was this fictitious tumor and the ‘what if’.

And of course, I was too scared to go to the doctors, because they would confirm the doom!  When in actual fact, when I grew some common sense (my mum dragged me to the doctor) it turned out it was due to the estrogen in the contraceptive pill that I was on. #AWKWARD. Then I came off the pill and everything was fine.

After that, the OCD about death and illness continued, but not just with my health, if my family got poorly, I thought that they had a deadly disease and i would be bidding fine farewells. If they didn’t answer the phone a few times in calling, I would think they had been in a car crash, or they had died – this was made even worse after reading the book called “The Secret” where what you think about you bring about….  Fak. Even writing this, I am careful in what I’m writing in case i attract the above (I am healthy, my family is healthy and we are all going to live to be over 100, just putting positive vibes out to the universe).

Even though this has always been an ON/OFF issue, which was triggered by a death or an illness. I have still managed to go about day to day life, it only really seems to come on when something distressing or emotional happens and over the past few months it came on again. Just before I found out I was pregnant with my miscarriage, and shortly after my ex-partner had passed away.

I started to get really bad cramps, bleeding and ovary pain and I was adamant that I had cervical cancer – again, reading that I know that sounds crazy. I had missed two smear tests and the pain matched symptoms (Which of course Google had diagnosed me with), I remember driving back from acting class and bursting into tears, uncontrollably emotional thinking that my children were going to be left without any parents and cursing myself how i could be so stupid and not go an get my smear test done.

The thought of going for a smear test scared me as, again, I was sure they would tell me something that they couldn’t take back, but I booked it and waited.

My vagina results came back healthy and happy and so was I. But then a couple of days later my sister started to get headaches, nausea and with blackouts. I started really freaking out thinking she had a brain tumor as my sister is never ill and she couldn’t get out of bed or work – it was a severe case of a migraine.

It was at that point I realized that there was something wrong with my mental state and not my physical health, the bizarre thing is, I am never actually poorly, this was when I started to do some research and I saw articles upon articles about health anxiety and everything that I read about fit perfectly to my mindset and my feelings. 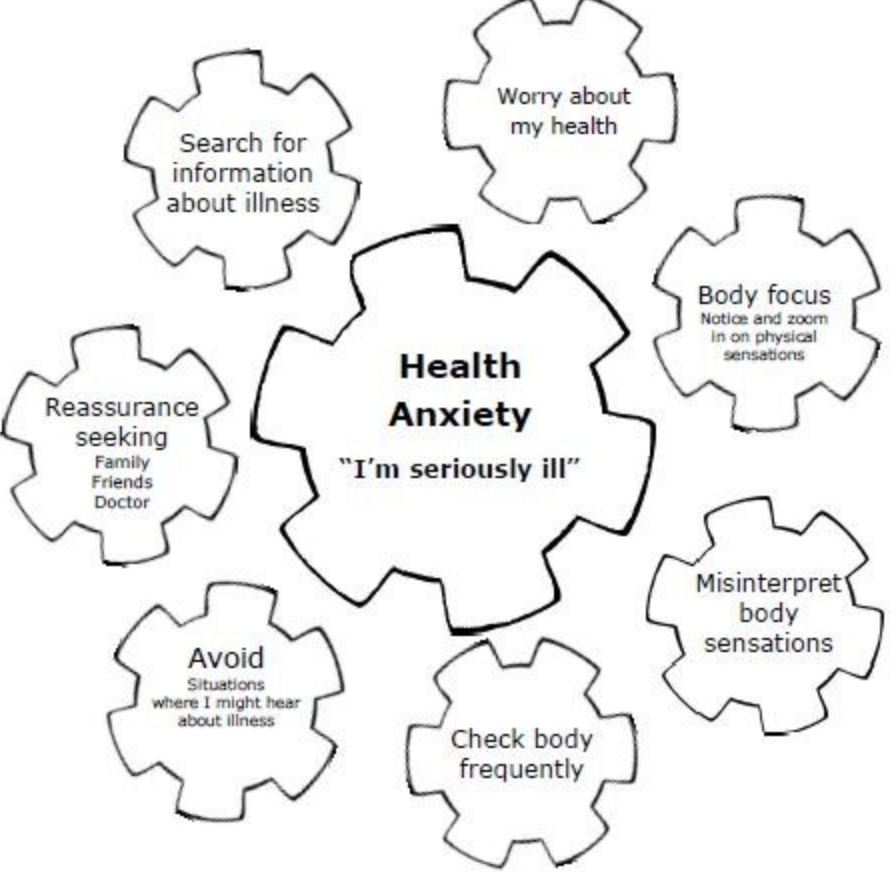 It would consume my thoughts, then I would pick up on every little minor detail or pain on my body. After reading articles I soon started to feel mentally better and realized that I AM NOT ALONE! So so many people that I have talked to about this have had it, or know someone who seems to have the same crazy thoughts that i have had, and these are people who I would not hae thought suffered with any form of anxiety.

Today, I know that I am fit and healthy and my children and family are fit and healthy, but even still if any of them are poorly, i automatically think the worst. So, I step out of the panic, look at everything surrounding the situation, breath and not overthink.

I am a great believer in the power of positive thinking, mind over matter tactics and techniquies and what i have found have really helped is to practice a technique called ‘EFT’ which is tapping on certain points of your body and that helps reduce, if not elimate anxiety and worry, then i look at the logic of why I am/was feeling that way, then look at the logic of the sitaution and if i still feel like there is something serriously wrong with me (which 9/10 times i dont and the symptoms go) i then go to the doctor.

And then a link to an EFT video to help you understand about tapping for health anxiety.

Anyway, I hope this has helped in some shape or form and if you do know of anyone who ios suffering with heakth anxiety, it is very real for them, there are many reasons why health anxiety happens, it generally happens when you are forced to subconsciously question your own mortality. The best thing you can do is listen, support and help!